Pelargonium a Powerhouse of Nature

Pelargonium sidoides is small and humble shrub that grows abundantly in the sun warmed, stony soil of the South African Eastern Cape and Lesotho grasslands. Known locally by its common name, African Geranium, it can be found nestling beneath tall grasses and aromatic floral neighbours on coastal slopes. The small indigenous herb has soft, velvety textured grey-green leaves and dark, magenta coloured flowers.

This unremarkable looking plant however contains a treasure trove of medicinal compounds and has been part of local healing practices for millennia. Pelargonium is an example of nature’s immune boosting and pathogen fighting power, packaged in plant form! It is celebrated as Afrigetics Botanicals’ flagship commercial herb.

The original hunter gatherer inhabitants of the Southern Cape, the Koi-San, knew of this herb and used it for the treatment of diarrhoea and dysentery. The Zulu people later named the plant Umckaloabo, meaning “heavy cough” and used it as a traditional remedy for respiratory ailments. Knowledge of the small bush later fell into the hands of the Cape Dutch colonists, who christened it Rooirabas, perhaps for its red tinted tuberous roots. Herdsmen dubbed the plant “Kalverbossie”, meaning ‘calf bush’ and used the woody twisted underground rhizomes to treat stomach complaints in their animals. It served in Cape herbal medicine as a tonic for weakness, fatigue and in the treatment of gonorrhoea.

The ethnobotanical potential of African Geranium was brought to Europe in the early 1900’s after a young explorer called Charles Henry Stevens was treated in South Africa for his pulmonary tuberculosis by a local healer. A bitter tea made of the roots of the plant drove his illness into remission. He then used the Umckaloabo herb to develop “Stevens’ Consumption Cure” and marketed it in England. It wasn’t until the 1970’s, well after Steven’s death that the plant ingredient of his remedy was identified as Pelargonium.

In the 1990’s, a German drug manufacturer, Schwabe Pharmaceuticals, developed a highly popular herbal cough syrup called “Umckaloabo” containing liquid extract Eps7630. In 2006, this company sold more than EUR80 million of this pelargonium based product. The drug is listed in the European and African Pharmacopoeia and has European approval as a herbal medicine and food supplement. Schwabe’s withdrawal of the patents for this medicine in 2010 has allowed other pharmaceutical companies to follow suit and explore the potential of this natural remedy. 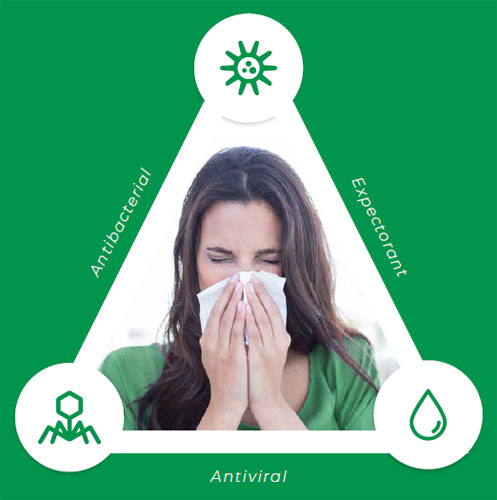 Many pharmaceutical companies use ethanol to extract the active ingredients from the pelargonium root. These extracts have proven effective for the treatment of respiratory tract infections including bronchitis, tonsillitis, sinusitis and the common cold. Clinical trials have shown the medicine to reduce both the duration and severity of these illnesses. One such preparation, Eps7630, prepared by Schwabe Pharmaceuticals has been the subject of over 20 clinical studies, involving 9000 people.

Pelargonium’s success as a cold and flu buster is unsurprising as over half of general practitioner’s visits involve patients complaining of upper respiratory tract infections. Adults can suffer from as many as four colds annually and young children get up to 12 bouts per year. It is considered to be the single largest cause of work and school related absenteeism. Antibiotics are generally considered to be ineffective for most cases of cold and flu, yet treatment is clearly demanded.

The dried rhizomes of P. sidoides contain a host of chemical compounds. Among these are polyphenols including gallic acids. Polyphenols are a group of plant chemicals which give bitter taste to foods, represent potent plant defence chemicals and often act as powerful antioxidants. Root extracts are rich in coumarins, including a unique phytochemical called ‘umckalin’. In addition, the remedy contains powerful flavonoids including quercetin, catechin and gallocatechin. These plant nutrients are responsible for vivid colours in fruits and vegetables and have anti-inflammatory and immune system benefits.

Pelargonium acts by preventing bacteria from sticking to the cells lining the respiratory system and by stimulating white blood cells to attack and destroy these invading bacteria. The chemicals contained in this medicine also help to support the immune system by producing specific proteins, called defensins, to protect cells from invasion. The antiviral ability of P. sidoides lies in its ability to stimulate the body’s cells to produce interferon, a chemical that ‘interferes’ with virus replication. Its antibacterial effect is attributed to chemicals in the extract causing the tiny hair-like projections which line our respiratory tract, called cilia, to beat faster and so expel mucous. In addition, chemicals found in the plant have a mucolytic effect, helping to dissolve thick mucus in the airways which makes breathing difficult.

There is no cure for the common cold, since it is spread by a virus, but Pelargonium has been proven to aid healing. This herbal medicine has been shown to be safe and effective and may form an important alternative to antibiotics.

What our formula achieves

The Afrigetics TM Cold Relief formula contains a powerful plant called pelargonium sidoides which has been proven to reduce the duration and severity of the common cold.
It’s especially helpful when a cold or flu goes to your lungs and can help reduce the risk of developing bronchitis.
We’ve added Rosa canina /rosehips to this formula to give you a potent dose of natural Vitamin C which helps the body recover even more quickly.

How To Use It
As soon as you feel the onset of a cold take two capsules twice a day. This will help to fight the infection before it gets too serious and will give your body the extra help it needs to remain healthy.
Colds and Flu symptoms are best treated with lots of rest, so take a break and let yourself recover naturally.

Thanks to Claire Van Rensburg

Sorry. No data so far.